What happens to self-esteem and dance when you leave your homeland? That’s the question that both of them are asking when they’re looking for a personal home.

Chiche and Ester open the Salon Urquiza in Berlin, where they want to build a home and re-create the Urquiza style. At the same time, both prove themselves as dancers on international stages, they teach, organize milongas, become parents, close the salon, lose and find each other again.

The film accompanies the dance and love couple through their life with the tango. After almost 15 years of recordings, fine work and a lot of travel, we are infinitely proud to be able to present this film to you. 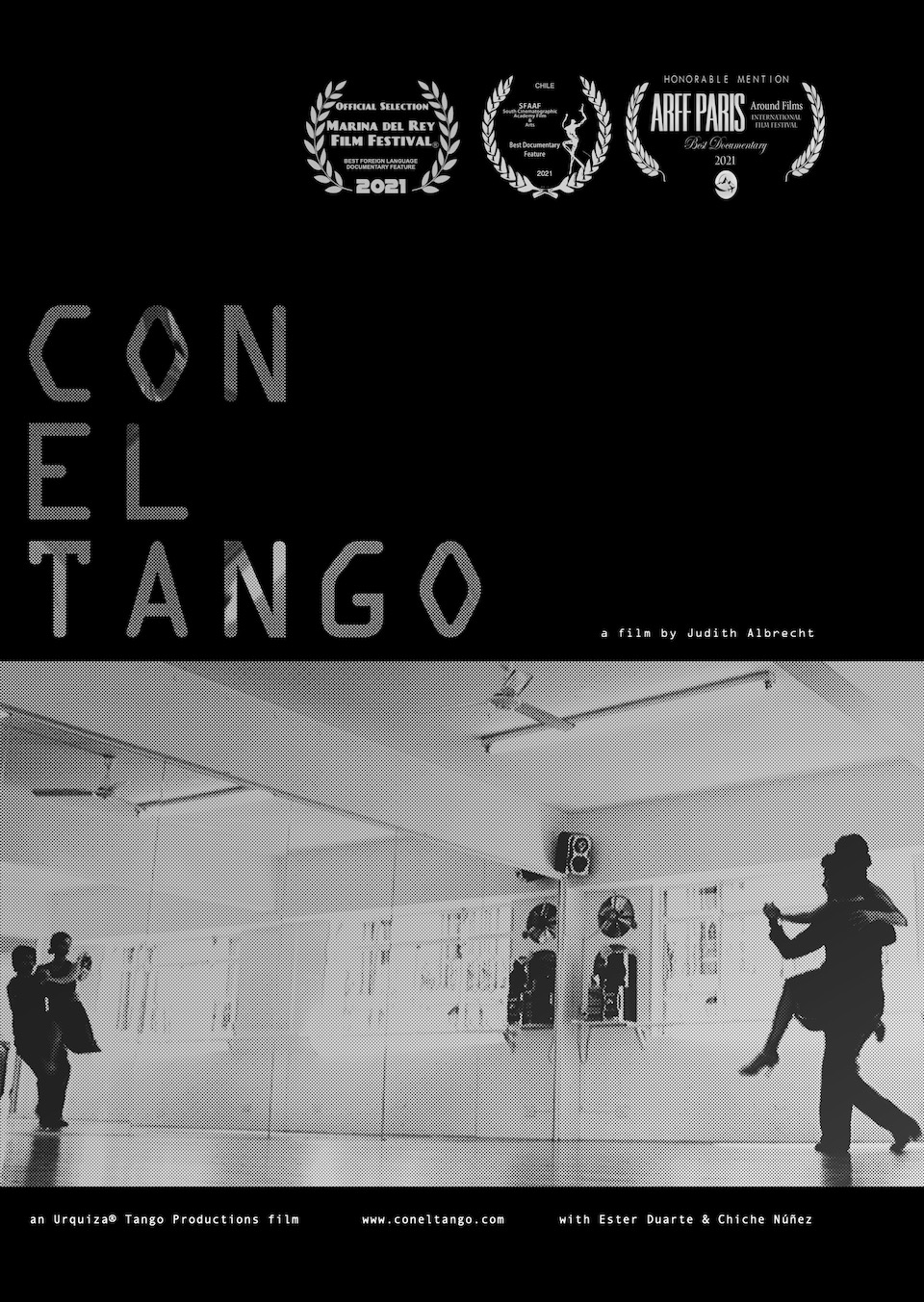 What happened so far – Prizes, Film Festivals and all news about the completion of the movie “Con el Tango”

Finally! On the 2nd of June 2022 came the big family of “Con el Tango” together in Berlin, the birthplace of the story, for a wonderfull Avant Premiere in the movie theater “Il Kino” in Kreuzberg. Even nicer: the documentary was part of the program of the well-known Berliner Tango Community Festival “Embrace”. Both functions were fully booked by friends and professionals. The chats went on long into the night, the party atmosphere came down slowly around 1 o’ clock in the morning. Ester Duarte, Judith Albrecht and Chiche Nunez could meet again and present their views and emotions to the public. A unforgettable evening, and the journey goes further: “Con el Tango” will participate to yet another international Festival, this time in Tokio Lift-Off Film Festival 2022. Here you can read what happened so far…

The journey of “Con el Tango”:

Our movie was completed in April 2020. A glamorous premiere was planned for May 2020, which could not take place due to the global situation. We didn’t let ourselves get down: we hit the path of international festivals. The hope to be able to offer a premiere soon remains, as soon as circumstances permit.

The start was in Denmark: the film was presented as the main event as part of the Jewish Culture Festival in the centre of Copenhagen.. After the performance, the protagonists Ester Duarte and Chiche Nunez were interviewed and answered questions from the audience before everyone was invited to a family milonga.

So the film’s journey continued: in March 2021 we received our first prize as best documentary film in the South Film and Arts Academy Festival from Chile. In June, it was an honorable mention at the 2021 ARFF Paris // International Awards in the category Best Documentary Film. And finally, in July 2021, we received the great news from the prestigious Indipendent Film Festival Marina del Rey Film Festival® in Los Angeles, California, that our documentary was awarded best documentary film in a foreign language.

Strongly personal was the die Avant Premiere in Vienna, home of the director Judith Albrecht, in Metro Kinokultuhaus on the 26. February 2022. Beside friends came many visitors and professionals, to celebrate and to discover more about the story of the documentary.

After about 10 years of filming, 3 years of post-production and a year and a half of limited opportunities for the distribution of independent films, we look to the future with great gratitude and confidence, and we are satisfied with the past.

All news can be found on our Newsletter and on the Urquiza-Facebook-Page and Instagram.